A multi-center prospective clinical study was carried out in Europe to evaluate the performance of the HTK solution in liver transplants.2 Four transplant centers participated. 228 livers were included in the study (205 were initial transplants, 23 were re-transplants). This trial took place during 1996-1999 under the auspices of Eurotransplant. The four transplant centers participating were: Innsbruck Transplant Center; Vienna Transplant Center; University Clinic, Essen; and University Hospital, Göttingen. The (patient) survival rate at one year observed in this study was 82.5%. The following table shows the patient survival at different times in the direct comparison study at Essen, the four-center prospective study, and the Hanover retrospective study. These data show that the patient survival rates for HTK-preserved livers are similar to those for UW-preserved livers. 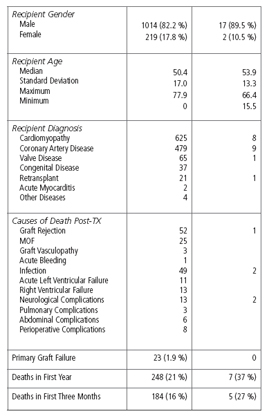 Wieselthaler et al.7 reported a randomized prospective study conducted at the University of Vienna comparing Custodiol® solution to Celsior, another cardiac cold storage solution. 48 patients were randomized to either the Custodiol® group or the Celsior group. Following are the results from this study:

A clinical trial of Celsior solution was carried out during the 13-month period May 1997 through May 1998, and was reported by Vega et al.8 The data from Bad Oeynhausen (discussed above) during this same 13-month period was reanalyzed separately from the larger population for purposes of comparison with Celsior. 79 patients were transplanted during the period at Bad Oeynhausen and the 7- and 30-days survival values for Celsior and the control solutions from the Vega study, along with the data from the same period from Bad Oeynhausen, are shown in the following table. It should be noted that the Bad Oeynhausen center accepts some donor hearts that would normally be rejected by other centers. The data are presented both with and without so-called “critical” donor hearts (e.g., those with cold ischemia time above 240 min, donor age greater than 50 years, etc.). Without the “critical” cases, the acceptance criteria for the Celsior study and the Bad Oeynhausen non-critical cases are more similar. 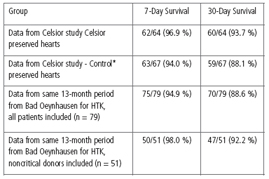 * The “control group” in the Vega study consisted of the pooled data from several different preservation solutions – whatever the center happened to use prior to the study. The solutions included UW, Roe, Ringer’s lactate, normal saline, Plasmalyte A, Plegisol, Carmichael’s, Stanford, and others.

Back to Prescribing Info